How the Irish dancing hard shoes are made

Once I was in Dublin with nothing

to do, so I came to the Fays shoes

shop and asked about the possibility

of making a report at how do they

And they kindly allowed me. (more)

Shoemaker Fay is lord of the Dance

The clickety-clack of fancy footwork is music to Pat Fay’s ears, particularly if he has supplied the shoes. “I wouldn’t have to look, I only have to listen and I would know from the sound that they are my shoes,” he said.

For those who make and supply Irish dancing shoes, business has never been better, boosted in no small part by the phenomenal success of Riverdance and its successor, Lord of the Dance. Indeed, the company run by Fay, 34, and his 32-year old brother Eamon, in Dublin, has supplied Riverdance dancers and was featured in the Riverdance video “The Journey.”

Fay, who now lives in Yonkers, N.Y., is the second generation of his family in the shoe business. It all began when his father, Donal, a native of Cavan, moved to Dublin as a young man. “He was a shoemaker making regular shoes,” Fay said. “About 1993, he was doing some work for Irish dancers and he noticed that the hard shoes gave kids problems with blisters and he came up with the idea that more flexible shoes with softer supple leather was the future.”

From that idea came Fay Dancing Shoes’ biggest seller, the Flexisole, with fiberglass tips and heels.

Fay, who learned Irish dancing himself as a child, explained that the advantage of the Flexisole is that it makes arching of the feet easier and enables the dancer to perform a lot of footwork. “Our Flexisole shoes are 100 percent leather, which means the lining is leather also,” Fay explained. “It fits like a glove, it takes the shape of the foot. And we have not stuck the soles on but stitched them on.”

Asked what’s the secret of the Flexisole, Fay would only say that it’s “a certain type of leather that I am not going to mention.”

The Fay brothers came to the U.S. in 1989. For four years, Patrick was a bartender and Eamon worked in construction. “Before we came here, we both had our own shoe repair shops in Dublin but it was a dying business,” Patrick said.

While general shoe repair, the age-old art of the cobbler, was in decline, Irish dancing was about to explode in popularity. And after Donal Fay had come up with the Flexisole, Patrick and Eamon returned home.

“We decided we would go back and expand the business in Dublin with the idea of me coming back here,” Patrick said.

“We got very lucky,” he added. “We only started making the shoes in 1993. At that stage Riverdance wasn’t even thought of.”

Today, Eamon Fay heads a thriving shoe factory in Dublin’s Denmark Street, supplying hand-made shoes to dancers not only in Ireland but throughout the world.

Patrick Fay will soon set up his own workshop in Yonkers to give Irish dancers in the U.S. a “more complete and efficient service.”

“At first I will make the shoes myself with the hope of having a couple of guys working for me in a few months,” he said.

Such is demand for Irish dancing shoes in the U.S. that Patrick Fay said he could use all the shoes his brother currently makes in Dublin.

Patrick Fay’s is now a familiar face at dance competitions, feiseanna, and Irish festivals throughout the U.S. He also visits and fits entire dancing schools. Next Easter, he will travel to the world Irish dancing championships in Ennis, Co. Clare.

On the American west coast, Fays’ dancing shoes are available through Shamrock Imports, in Valley Village, north of Hollywood, Calif.

Entering his office last week, Fay’s phone was ringing. “Do you know what size you need,” he asked the caller. He listened, then queried further. “Size 7, is that Irish or American?”

With a few more details settled, a delivery date promised and credit number in hand, another pair of Fays dancing shoes was on their way.

We were delighted to recently craft a pair of our dancing shoes as a gift for The First Lady Michelle Obama and her two daughters, Sasha and Malia Obama, presented above by Riverdance lead dancers Maria Buffini and Padraic Moyes prior to a special performance of Riverdance at The Gaiety Theatre, 18th June, 2013 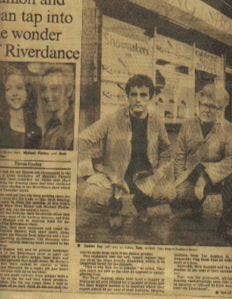 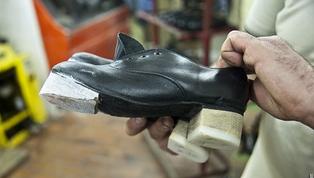 Eamon and Dan tap into the wonder of Riverdance

"Dan Fay and his son Eamon are shoemakers

to the stars. In a quiet workshop off Dublin's

Parnell Square they have crouched for weeks

over their lasts, making the dancing shoes that

have clattered in spectacular rhythm at the

night.Sixty-four-year old Dan has been making

Irish dancing itself - came in from the margins

at last year's Eurovision when Jean Butler and

Michael Flatley tapped their way into the

Ms Butler was wearing their handmade shoes that night, as were most of the backing dancers, and both Jean and Michael will be wearing them for the duration of the Riverdance show. In addition, they have measured and fitted the Russian Cossack dancers with their shoes, along with the guest tap dancers from America and a host of supporting performers. The Russians have also has their Cossack dancing boots mended in the Fay workshop.

Dan and Eamon will also be present backstage each night of the Riverdance show to carry out running repairs on broken straps, loose heels and any other emergencies that might occur. Ms Butler's shoes in fact were rushed by courier to their workshop last Thursday for a repair job just hours before the curtain went up on the show.

The shoes are made entirely from leather with a fiberglass tip at the toe and heel which produces that tap effect. The tip can range from a half to three quarters of an inch thick at the toe and can also be made from nails if the dancer prefers. Dan explained that the soft, supple leather they use gives the shoe terrific flexibility, which is an important factor for the dancers. "That is why they are so popular", he added. They also stitch the sole so the show as opposed to simply glueing it on. The Fays' dancing shoes have been a feature of feiseanna all over Ireland for a number of years now but their biggest market is in America where they export almost 60 per cent of their business. Dancing teachers from Los Angeles to New York will frequently ring them with an order for 30 pairs or more at a time. Australia, New Zealand and the U.K. account for another 25 per cent of their market and Ireland the rest. They visit the provincial, All-Ireland and world championships each year and have noticed an upsurge of interest in Irish Dancing, "especially since the Eurovision"" 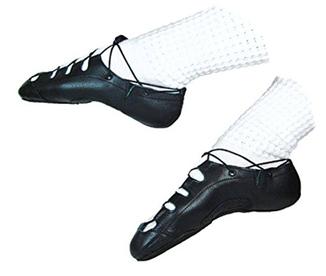